Should smart contracts be legally enforceable? 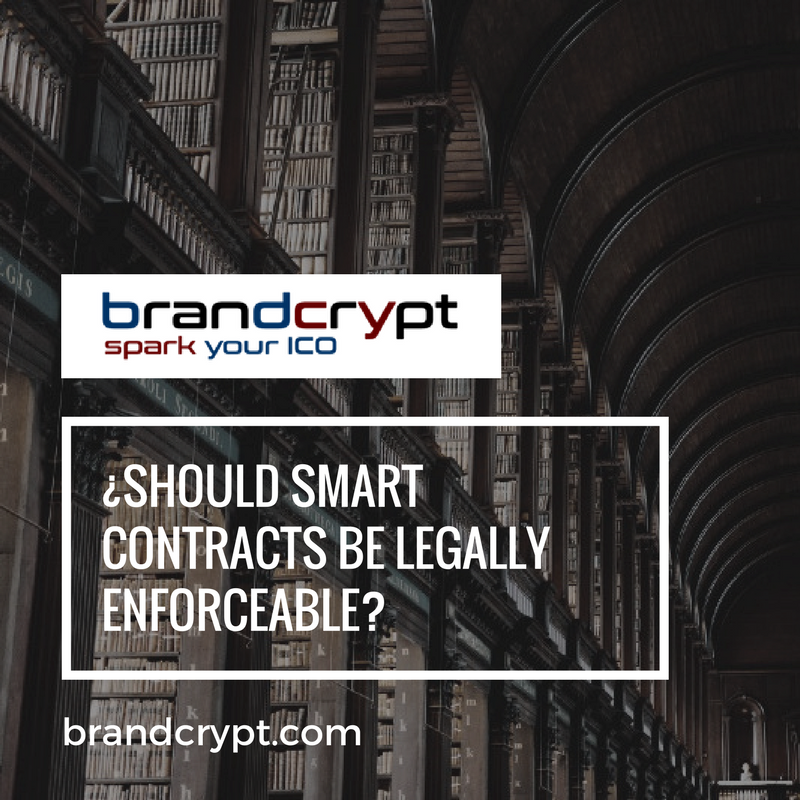 Should smart contracts be legally enforceable?

Smart contracts (or the term I prefer, PET) are great: they can reduce transaction costs by cutting off monitoring and application. More philosophically, they allow people to unite credibly. But, society probably should not want them to be legally enforceable.

The main case of the PET is that they can eliminate the need to enforce the law, especially litigation, the most expensive type of execution that exists. In addition, they can increase opportunities by forcing people to fulfill their commitments. Companies can attract users by promising not to abuse their personal information … or they can be like Apple, and make it probably impossible to abuse that information. PETs put that commitment on steroids.

But, at the end of the day, “smart contracts” are neither smart nor contracts. They can not adapt to ambiguity and are only as good as the person who codifies them. In reality, they are “dumb”, like the “pipes” of the Internet, that carry data without knowing what those data are. In the same way, they are not contracts: a contract is essentially an agreement, and agreements live in the minds of people, not hard drives. The “smart contracts” are really just transactions executed by programming (hence, PET). They are not agreements, they are technology to enforce agreements.

PET can be fantastic … when they work. But contract law is about what happens when things  do not  work. It is the messy process of imagining what was in each person’s head, and whether they made good faith efforts to reach agreement or if they had good excuses.

By nature, “smart contracts” can not address ambiguity, nor can their programmers plan for each contingency, nor do we have the ability to translate all the real-world data we may need (including the content of minds) to adjudicate such things. .

Some factors that contract law has to discover: Who are the parties? What was the agreement? Was the offer / acceptance valid? Did the value (“consideration”) flow in both directions? Were there good faith efforts or excuses for non-compliance? Partial performance? Strategic infraction?

Sometimes, a contract is not enforceable. For example, it could be so obviously unfair to express coercion: contracts are only valid with mutual consent. A contract may also lack mutual consideration; the courts will not make people have unilateral contracts. A contract can also be void if it goes against public policies, such as a real estate contract that only allows subsequent transfers to members of a certain race.

Let’s think about what it would mean for a PET to be legally enforceable, using the DAO incident. Technically, when the “contract” was drained from ETH, it was not violated. The rules were followed. Strategically and maliciously, yes … but it continued, nonetheless.

When the ETH community moved away from ETC, it was protecting the agreement (risk capital generated by crowd!) In the minds of the users, but it did so through the social repudiation (breach) of the “contract” itself. So, the “right” answer (if “the code is law”) is that the community must be subject to the terms. In other words, the community must respect the theft and  legally prohibit the  use of ETH.

Clearly, prohibiting holders is absurd. “Law” is as good as social consensus. But if the goal of an “intelligent contract” is to escape the law … well, you have a bit of paradox, right?

Some other problems: contracts require counterparts; PETs do not. When things go south … who do you demand? The community as a whole? Network operators (ie, miners)? The guy who wrote the code itself? Someone with control over EIP? @VitalikButerin  ?

Actually, “smart contracts” are not contracts. Rather, they are a particular mechanism of contract enforcement that exists in the mind. In other words, the existence of a PET is  evidence  of a contract.

In other words, it does not matter if an “intelligent contract” is executed incorrectly or if it has errors. If it works, great; If not, a court will have something to say about it. The court could deduct the agreement from the documentation / advertising / code content … which means that, in a sense, an “intelligent contract” was * always * legally enforceable, but not (necessarily) by its own terms. And it is likely that it is, because he only needs a court order when things have soured.

In summary: PET scans reduce the need for litigation by clarifying basic obligations and automating performance. But once you’re in litigation mode, they have very little impact, except as evidence of the contract in people’s heads. Sometimes that can not be enforced … and that’s good.