¿Why your investment in ICO goes to zero?

Home / Blog / ¿Why your investment in ICO goes to zero? 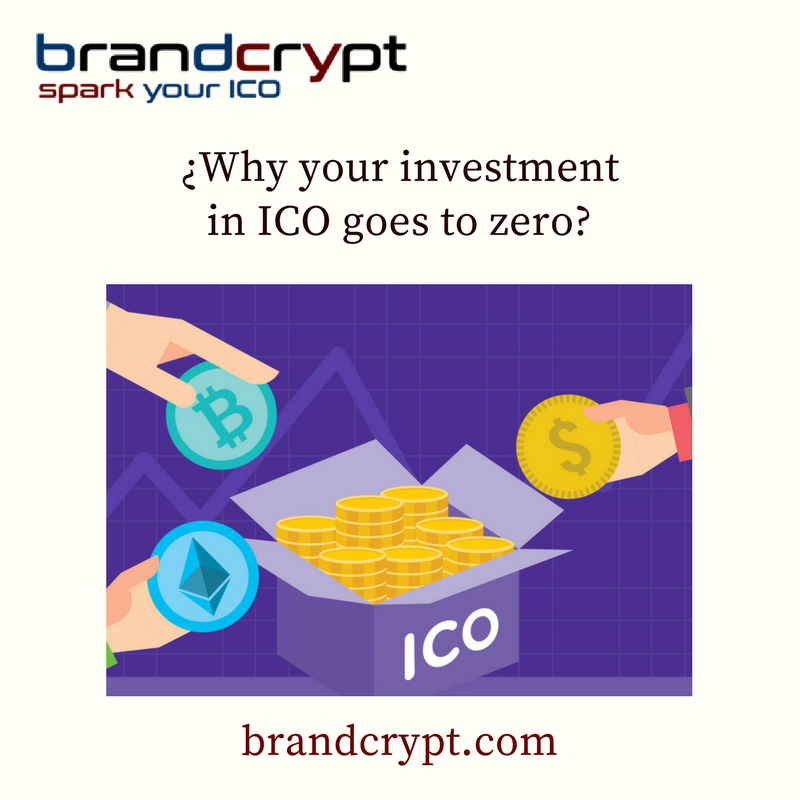 ¿Why your investment in ICO goes to zero?

When China banned the UFOs last September, Asian trade changed to Japanese stock exchanges. So far, Japanese regulators have adopted a non-intervention approach for both the cryptocurrency trade and the UCI, and although these two things are often grouped together, they are very different.

Cryptocurrencies are already becoming an important part of the economic outlook, but ICOs will prove to be an ephemeral fashion with the majority of ICO cards worthless.

This is not a radical prediction. Blockchain technology does not change fundamental economics, and all tokens are not created equal. Tokens with intrinsic utility will increase in value, while those whose purpose is to extract value from a business will lose their value.   Almost all ICOs are of the posterior type.

The two most known and valuable tokens are Bitcoin and Ethereum. Both have a new and intrinsic utility. Bitcoin allowed a rapid, pseudo-anonymous transfer of value without a controlling intermediary, and Ethereum’s smart contracts allow documenting and imposing simple payment agreements through software that is not under the control of either party.

Both tokens represented significant advances in the state of the art and introduced the utility that was not practical without them. In addition, this utility was enabled only by the tokens themselves and not linked to the fortunes of any company or group of companies in particular.

The Bitcoin ecosystem expanded because both illegal and illicit transactions were attracted by the system. And although Ethereum’s smart contracts show great potential, the demand and growth of ecosystems have been driven mainly by the fact that Ethereum allows ICOs.

In both cases, given that there are few practical alternatives, the price and demand of the tokens grew as their ecosystems grew.

Most ICO startups, however, are not creating a new utility, but are grafting cryptocurrencies into an existing business model, and the value of these tokens is directly related to the success of these companies.

Businesses ranging from retailing electricity to crowdfunding, credit cards and venture capital funds use ICO to raise funds. The CEOs with whom I have spoken seem to sincerely believe in their vision, and that their chip holders will see substantial returns.

But they are wrong.

The future value of these tokens does not come from the enabling of a new utility with few practical alternatives, but through the diversion of cash from operations.

ICO startups generally structure their businesses so that the tokens must be purchased to do business with the startup. The theory is that the demand for tokens will expand as your business grows, and from 1% to 5% of the corporate cash flow will be diverted to cardholders. With the founders they usually have between 20% and 30% of those tokens.

However, unlike Bitcoin and Etherium, ICO startups are not creating a new utility,    but enter existing markets with established competition, and will be at a significant competitive disadvantage for companies that do not have to pay 5% of your total sales.

Although ICO startups often promote Blockchain as a competitive advantage, these tokens will be a millstone around the neck once they start operating. The more generous the symbolic payments, the greater the operational disadvantage. Since the tokens themselves do not offer intrinsic utility, their value comes directly from the operating margins.

Even in cases where the blockchain improves operational efficiency, ICO companies will be disadvantaged for startups that pay less or nothing at all and will be forced to leave the business. Once that happens, the tokens will have no value.

“Actually, ICO cards are similar to dividends and should be valued as such, however, assessing these tokens using something like discounted cash flow is a hair-raising exercise.”

Valuations often involve billions of dollars in annual sales. This is quite ambitious for companies that, for the most part, do not have functional products or significant experience in the industry.

Perhaps the most heinous use   of ICOs are the companies that use them to raise funds for risky investment. As is typical of most ICOs, the founders retain up to 30% of the tokens and tend to have little experience in the domain. While Blockchain has the potential to streamline dividend payments and help shareholders to assert their rights, that is not what is happening here. ICO investors are simply blinded by Blockchain and pay a 30% charge for a fund managed by an unproven team.

Manual technique does not change the economy, and most ICOs are just terrible investments.

But it is even worse than that.

Corporate capital and debt come with specific and enforceable legal rights. The tokens do not. While most white papers explain what the startup “plans” to do, the company has no legal obligation to follow those plans, and the pseudo-anonymous nature of cryptocurrencies will likely make legal claims difficult to apply in the future. practice.

However, the ultimate indignation of investors will happen when everything goes well. If, against all odds, an ICO start-up succeeds and starts generating the billions in sales necessary for its tokens to be worth millions, nothing will prevent the company from keeping those millions by itself.

Unlike Bitcoin or Etherium, which have an intrinsic utility, most ICO tokens are simply a mechanism from which startup is used to perform business transactions, and they are free to change that mechanism. There are few legal or technical obstacles that prevent a start-up company, or more likely an acquiring company, from creating a new, fully owned token, seamlessly migrating its customers to it and leaving existing token holders with worthless tokens. .

In the long term, I think we will see thousands of successful and domain-specific cryptocurrencies, but those that win will be those that provide the lowest-cost infrastructure, not those that promise the highest returns.

Obviously, speculative benefits will be obtained in the purchase of chips in ICO or before, and will be sold before the company begins to operate and the real world economy takes effect, but in the long run, the value of almost all these tokens will be reduced. to zero.